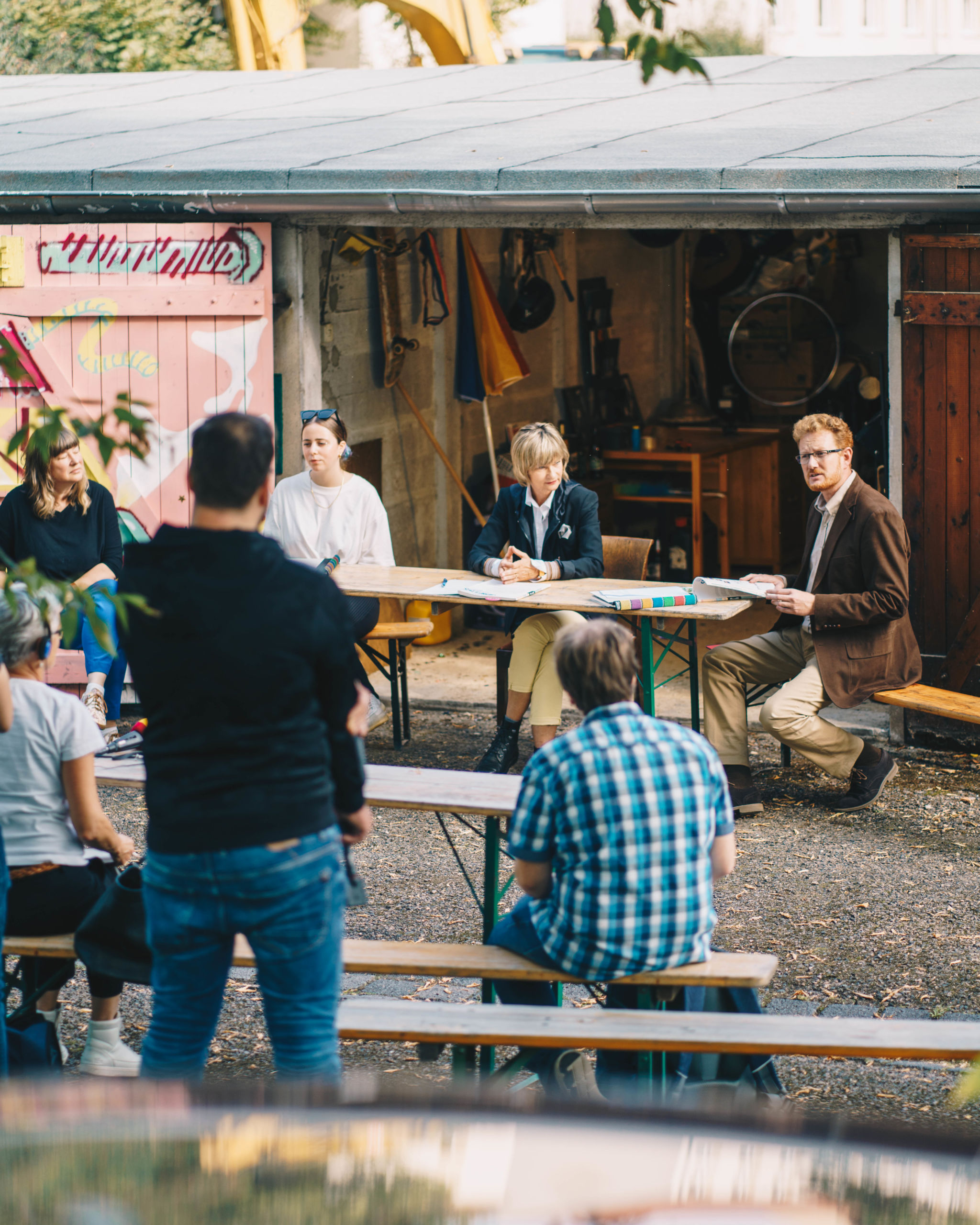 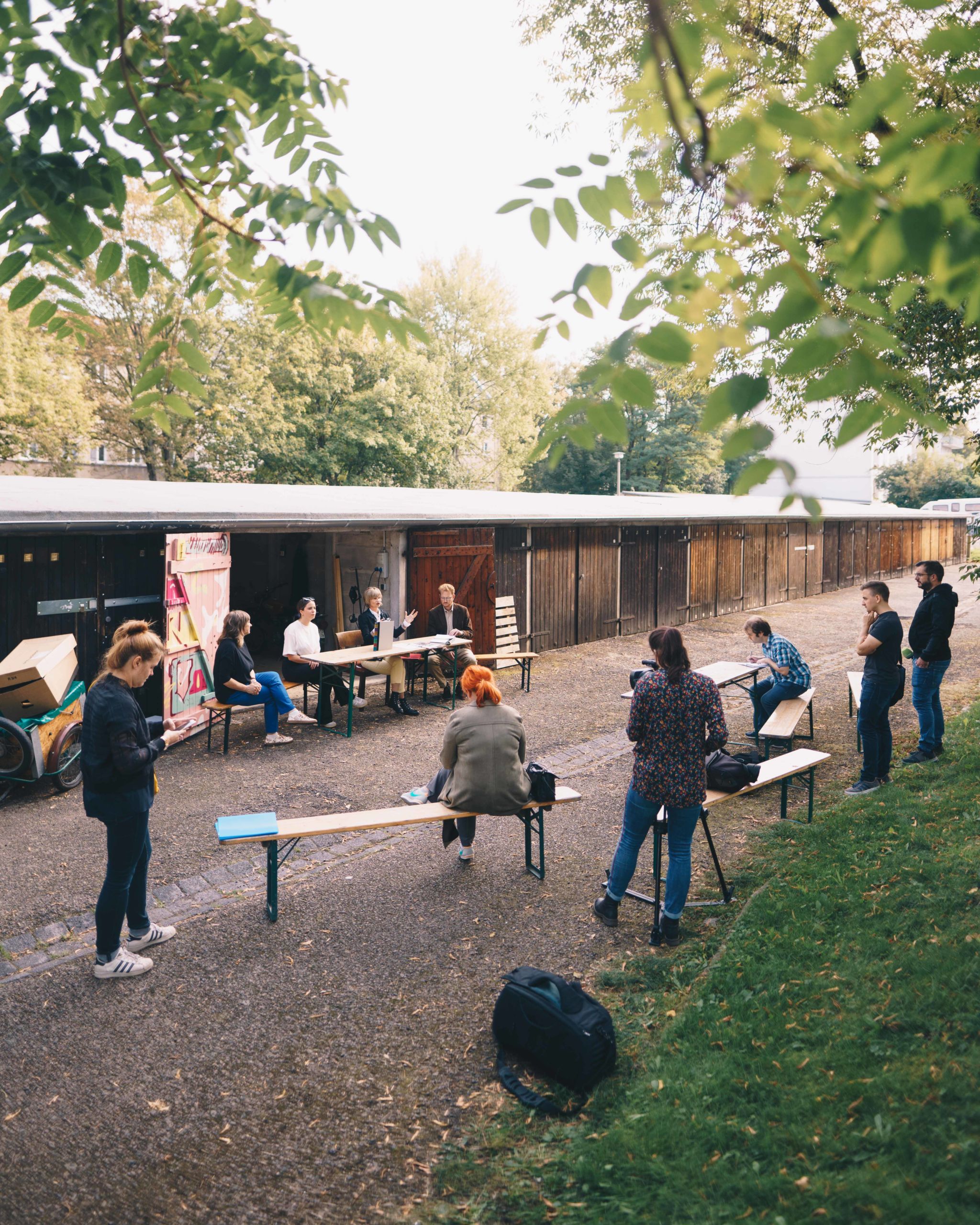 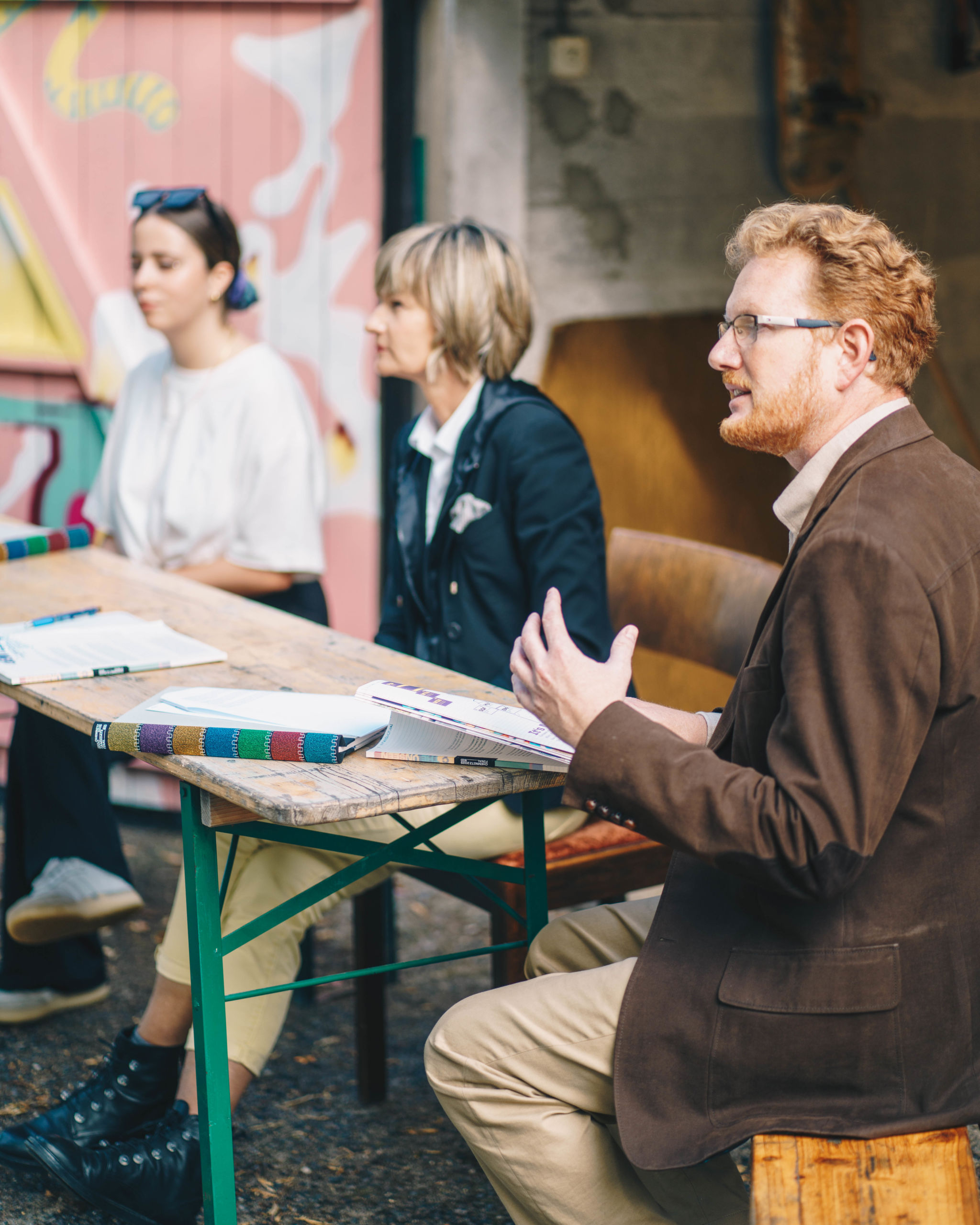 Chemnitz is the city of makers. Every historical era supports this statement – and the even bidding process was supported from the outset by many indefatigably active players, committed volunteers and civic initiatives.

It’s no accident that the bid focuses on making things, DIY, the “inner artist”, self-taught individuals and the creative process.

Making things together brings us closer together in a European society that increasingly shies away from constructive dialogue. Particularly in Eastern Europe, the brutality and speed of transformation over the last 30 years have left wounds with hidden repercussions, with countless individuals withdrawing from political debate. While extreme political opinions are becoming louder, as for example in Chemnitz in August 2018, the middle is silent. Chemnitz2025 wants to encourage this “silent middle” to get involved again: in the neighbourhoods, in the cities, in the regions of Europe. Because the challenge in Europe needs active Europeans: in the fight against climate change, in dealing with demographic change, in mitigating the social and economic consequences of the COVID 19 pandemic.

Chemnitz2025 will help these active Europeans to become self-effective: with the platform maker-space.eu – an innovative digital tool that brings together analogue and digital activities, promotes international exchange, enables hybrid projects and creates networks.

At the same time, the European Workshop for Culture and Democracy (EWKD) in the Hartmann factory will become the physical centre of the programme. With a broad-based workshop and training programme, the house will become a meeting point for makers, a space for experimentation, a starting point for the Academy of Autodidacts, a scientific centre in the field of right-wing extremism and a living archive in the coming years. In 2025, the visitors’ centre of the European Capital of Culture will also be built there.

With the motto “C the unseen”, Chemnitz2025 turns the spotlight to the unseen: To the surprising, the new – as it was never before visible. To the unseen of the “silent middle”, as well as to the marginalised. The unseen city, the unseen European neighbours, the unseen places and biographies, the unseen talent in every individual.

The program also draws in every other unseen European city or region that makes a bold statement for democratic coexistence – and it especially aims to show the people who join in with the creative process to help us live in a cosmopolitan and diverse community unimpeded by national boundaries. 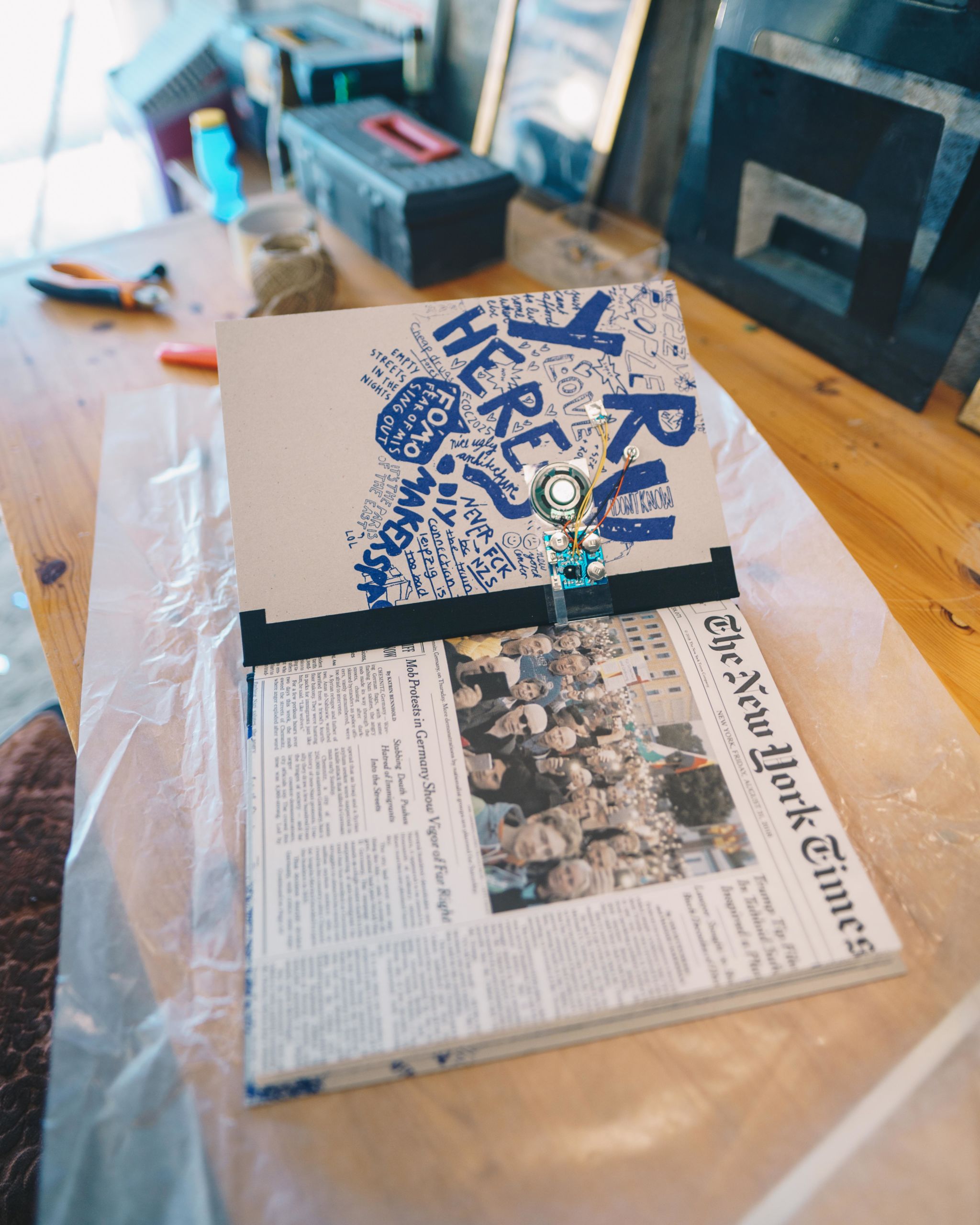 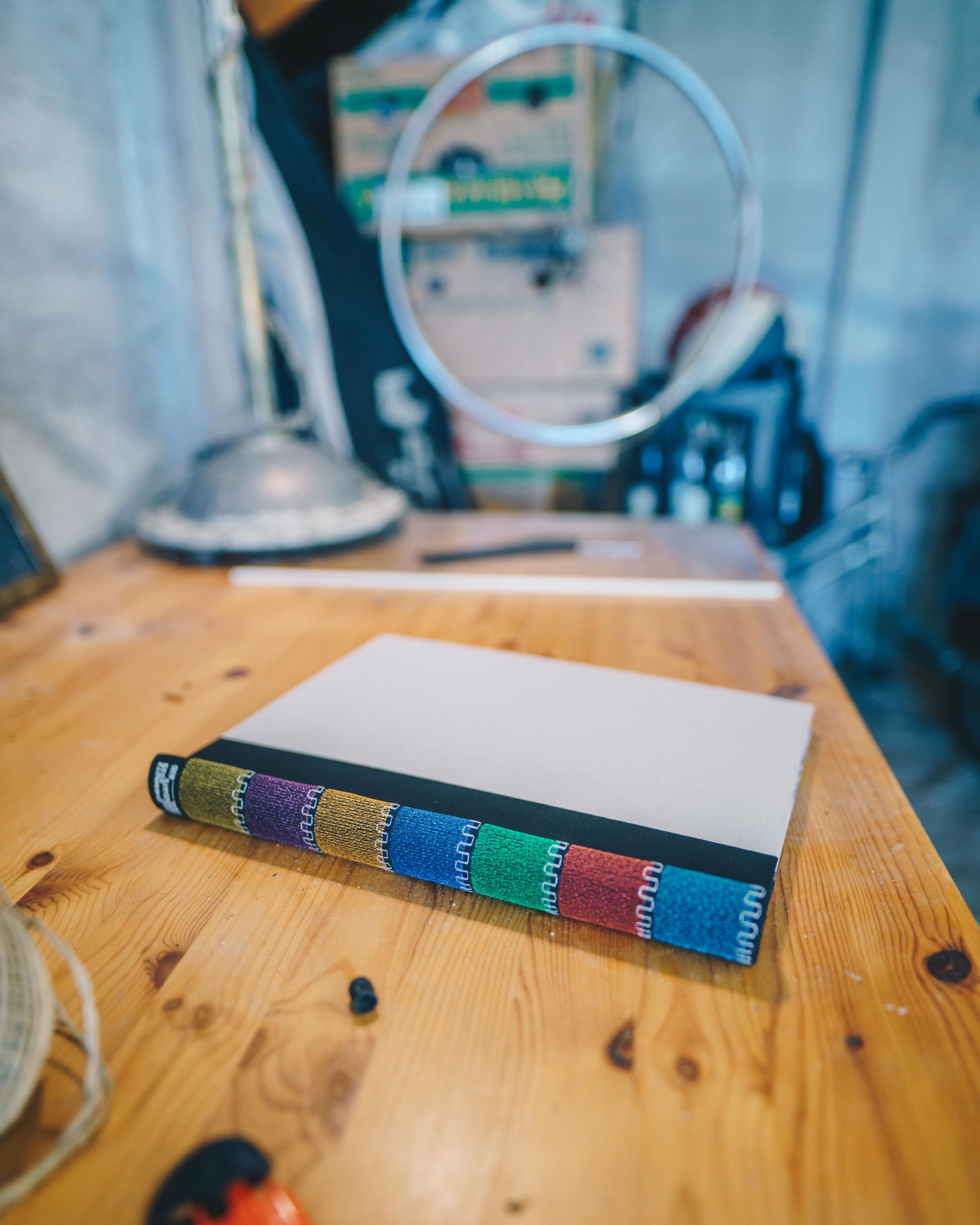 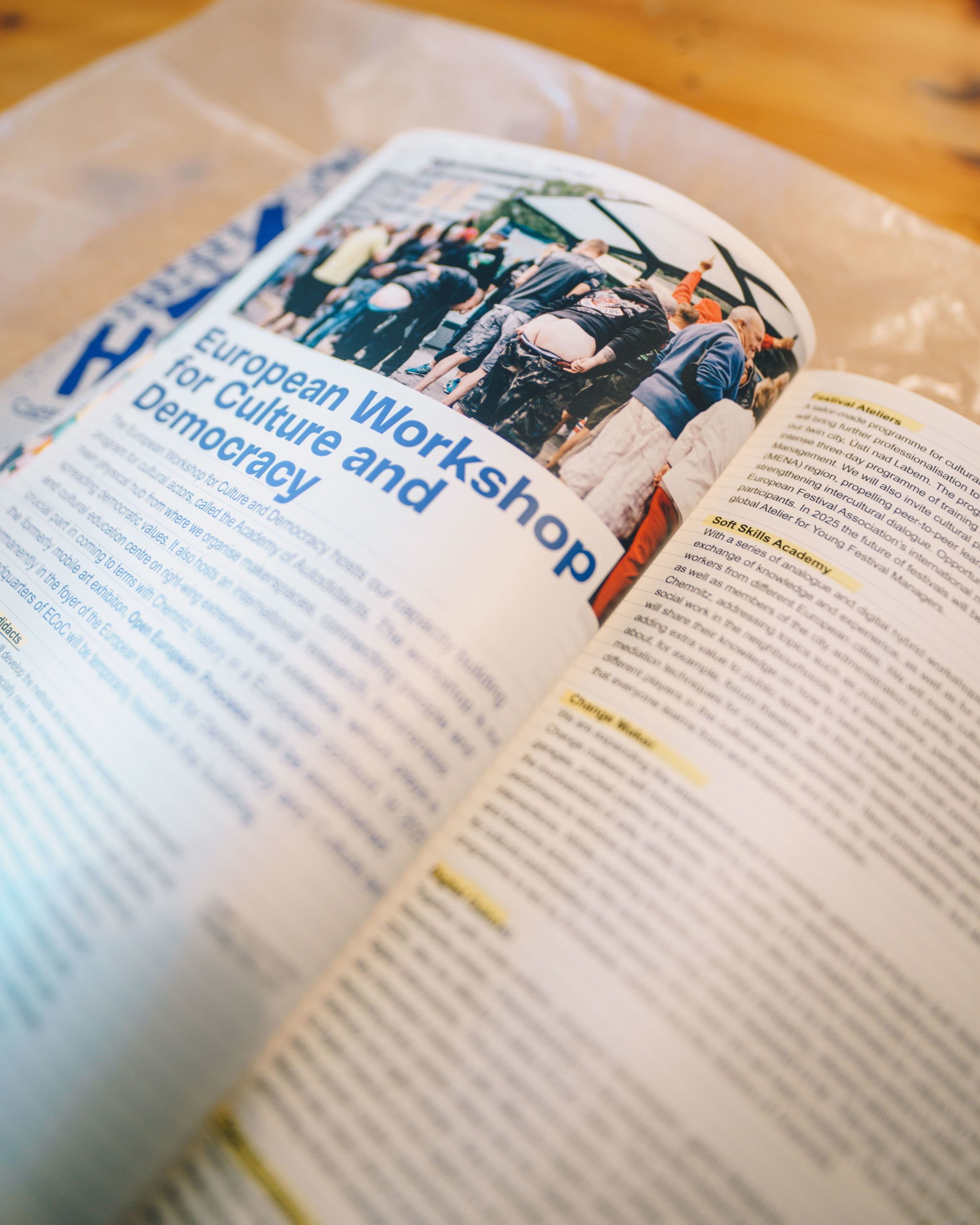 Chemnitz2025 will fill the public spaces between the buildings of the city and the region, will take place where the people are. But Chemnitz2025 will also rediscover places, that many people pass but do not perceive, like the city by the river or the so-called detached places. The programme calls on people to recognise their own talents and to use them. There are four main programme lines for this purpose.

Chemnitz is an Eastern European city in a Western European country. In the city, the experience of cohesion in difficult times lives on, just as much as the fragility of circumstances. The mentality of the East is characterised by the mentality of the makers and the sense of community of people, manifests itself in the design from architecture to everyday objects, in improvised solutions or artistic work.

Places where exactly this history still exists in secret are the garages. Long since too small for the car bodies of modern times, they have become workshops, storerooms, refuges of very private stories.

e.g. the garage as a treasure chest – a theatre of lost property

Garage owners from all over Europe open the doors to their private, secret world. Together with the Figurentheater Chemnitz (puppet theatre of Chemnitz), they will develop small puppet theatre pieces from their personal found objects and stories, which will be performed on the stage of a mobile garage. At the same time, the objects and stories will be collected via Instagram to tell digital stories as well.

e.g. the garage of the autodidacts

Following the example of the Bauhaus, a design and art school for young, enthusiastic people is being created in cooperation with the Bauhaus University Weimar. Depending on their interests and skills, they can take part in an artistic education programme in the garage of the autodidacts – either in the areas of materials and tools, colours and compositions or cultural management. The teachers are also self-taught.

Europe’s policy of open borders makes us all neighbours. And what this means for our democratic values such as respect and tolerance can be experienced daily in our immediate living environment. Although we live next door, we have very different opinions, hobbies, rituals and preferences. Nevertheless, we come together on the doorstep – through small talk, the exchange of experiences, doing things together. That is what keeps our society together.

Following the principle of the edible city, 4000 apple trees in 2000 different varieties will grow all over the city, each one cultivated and sponsored by a local patron who will also welcome international guests and host cultural events. Artists from different countries will create an art parade called “WE PARAPOM”, so that the parade will overcome property and social borders. Finally, thanks to the interactive gaming app “Go Apple go”, based on Pokémon Go, an educational aspect will be added, which aims at sustainability, resources and migration. Various events from the Apple Blossom Festival to the Slow Food Movement with the best apple pie recipes will accompany the theme.

The programme brings together citizens from all over Europe on making, on creative work. From urban culture to tourism, from exchange among professionals to networking among laymen, the range of joint activities is wide.

It is the extraordinary ideas that make companies successful today. For this reason, and because Chemnitz, like other industrial cities, is facing structural change in industry, the programme brings together the makers in the arts and business on an equal footing: Europeans from the cultural and creative industries, emerging and established companies, students and professional partners find new energy and creative strength in collaboration. With various “makers’ hubs” (e.g. local economy) in Chemnitz and the region, an experimental network is being created, which includes a competence programme for companies as well as a research and exchange programme for makers and a creative tourism programme inviting makers from all over Europe to explore the cultural heritage of the region with their own hands.

Without autodidacts the European art world would only be half as exciting. That is why the Kunstsammlung Chemnitz is dedicating a major exhibition series to them from 2022 to 2025: from Frida Kahlo to Henry van de Velde and Edvard Munch. All three exhibitions experiment with Artificial Intelligence and create the art of interacting exhibition visitors. The CC AIR Artist-in-Residence programme invites international self-taught artists* in the fields of fine arts, music, literature and film – the residency is planned twice a year for three months starting in 2021.

Getting things moving, initiating something, driving things forward – the European makers are on their way. Chemnitz2025 takes them to the region where the mining tradition and industrial history is proudly lived across national borders.

The art trail runs through the entire region around Chemnitz. Young artistic positions are presented at 28 permanent or temporary locations – and while hiking trails are marked in yellow, red, blue or black depending on the degree of difficulty, we introduce the new colour for art and entertainment: The Purple Path, however, does not only wind its way through the surrounding area, but also through the past, present and future. It reflects the history of the workers’ movement and the history of Wismut, initiates sustainable nature projects or deals with the women of Hoheneck.

The most famous amateur cycle race in the East is coming back – and celebrating the region’s enthusiasm for cycling. The race starts in Pilsen (Czech Republic) 80 years after the end of the Second World War (European Capital of Culture 2015), crosses the corridor where American and Soviet troops met in 1945 and ends after two days and 170 kilometres in Chemnitz. Invitations are extended not only to teams of cyclists from former European Capitals of Culture, but also to cyclists from all over Europe, who will experience a broad cultural programme and Czech-German hospitality along the route.